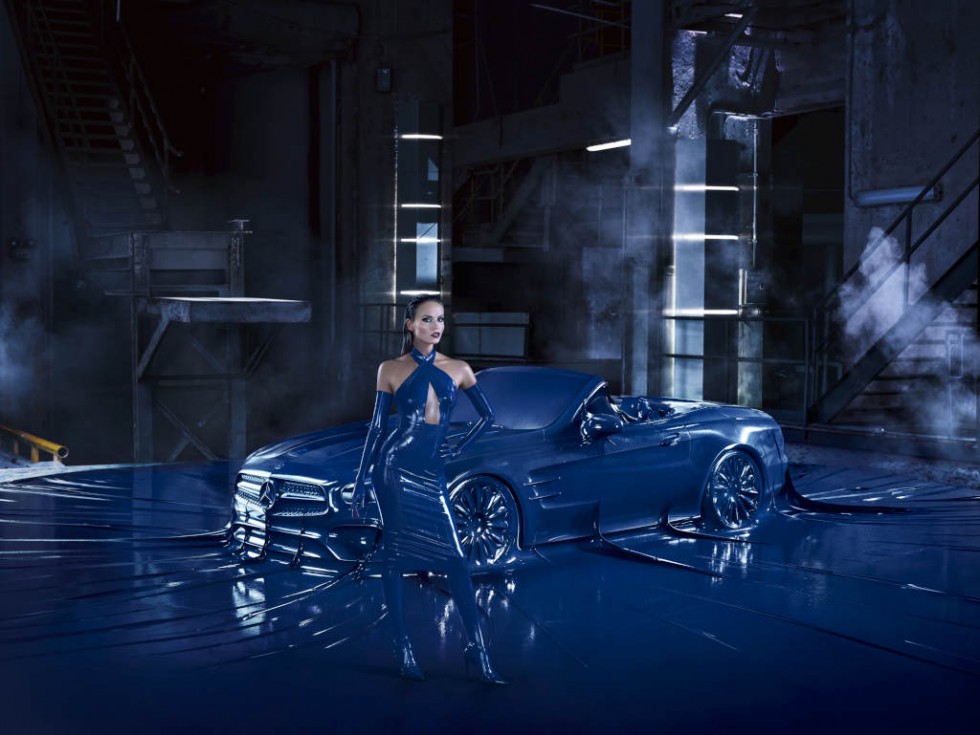 The campaign, Obsession with an Icon, puts the new SLs’ distinctive design in the spotlight, highlighting its sinuous lines and sensual curves in precise detail by wrapping the car in latex. The car is photographed alongside Natasha Poly, who wears matching body-hugging latex.

The campaign was shot in Miami, Florida by American photographer Jeff Bark, who’s feted for his high-octane use of colour and a pop-edged, hyper-realistic style. Bark was already aware of designer Atsuko Kudo’s latex work, having shot it for a number of fashion stories. “For me, my photography is only about light and colour, so in this case I wanted to light the car to emphasize its form and three-dimensional qualities, but having the latex as a second skin so you could see the lines of the car in a new way.” he explains. For Bark, the project was about pushing boundaries. “What’s so appealing about working with Mercedes-Benz is that each campaign is very different; they always try to make something you haven’t seen before,” he says. “An icon has to be an obsession for more than just the person who is in love with it; one of the things about Mercedes-Benz is that it’s universally loved.”

Alongside the SL, the star of the show in matching peacock-blue skintight latex is Natasha Poly, one of the world’s most recognizable faces. “I’m very proud and honoured to have become a member of this amazing family at Mercedes-Benz and to do this beautiful campaign, introducing this iconic car,” she says. “I feel very powerful in this dress, like a superhero. I feel very strong and sexy at the same time.”

The latex work is by Atsuko Kudo, the Japanese-born, London-based designer who’s world-renowned for her ingenious work with the fabric, and whose hand-made pieces have been worn by the likes of Beyoncé, Kate Moss and Lady Gaga. When Kudo was approached by Mercedes-Benz to take part in the fashion campaign of the new Mercedes-Benz SL she immediately saw a synergy between the car and her designs. “They are so similar- both are sexy, curvaceous and super shiny,” she says. The car was wrapped in 130 square meters of custom-made latex produced from five separate sheets that were meticulously glued and polished by hand. The result is a campaign that seamlessly combines a daring and innovative concept with an accomplished technical feat.

“Like no other model, the SL embodies the myth of Mercedes-Benz. Just think of the legendary 300 SL or the Pagoda– everlasting vehicles. Icons such as the SL are timeless and redefine themselves through innovative design over and over again and they often polarize”, said Dr Jens Thiemer, Vice President Marketing Mercedes-Benz Cars. “These characteristics were successfully carried out for our new fashion campaign with the SL.”

Bark chose to shoot the campaign in a working quarry, selected not only for its monumental proportions but also for the rugged contrast it offered with the SL’s sleek lines. “I wanted somewhere that would enhance the beauty of the car, though in this case that wasn’t very hard to do as the car is already so beautiful! That is why I wanted to put it in an environment that maybe wasn’t so beautiful to make it stand out.”

Both the film and Fashion Campaign were produced as part of the International Fashion Engagement for Mercedes-Benz. For the Autumn/Winter 2016 season and to coincide with the international catwalk collections, the theme is Obsession with an Icon in reference to the iconic Mercedes-Benz SL.

Concept of the Fashion Film

The film begins panning down onto the SL leaving frame; sounds of its engine revving are heard. The noise of the engine wakes Natasha. In a panic she notices that the car is not under the latex cover and flushes with anger. As she enters her surveillance centre she realizes the car is driving through the grounds. She breaks into a jealous rage and makes her way to the car park. She finds the car covered in latex and signs of relief washes over her as she realizes that the car is safe and she is close to the thing she is obsessed with the most.

How to go green with eco-friendly clothing